Adani coal mine should be suspended, UN says, until all traditional owners support the project 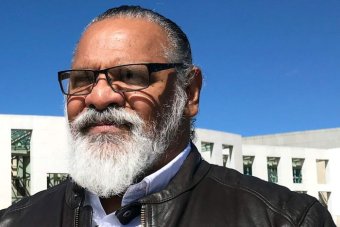 The United Nations has asked the Australian Government to consider suspending the Adani project in central Queensland until it gains the support of a group of traditional owners who are fighting the miner in court.

A UN committee raised concerns that the Queensland coal project may violate Indigenous rights under an international convention against racial discrimination if it goes ahead, giving Australia until April to formally respond.

Meanwhile, a public interest legal fund backed by former corruption fighter Tony Fitzgerald has stepped in with financial backing for a federal court challenge to Adani by its opponents within the Wangan and Jagalingou (W&J) people.

The Grata Fund, which boasts the former federal court judge as a patron, agreed to pay a court-ordered $50,000 bond so W&J representatives can appeal a court ruling upholding a contentious land access deal secured by the miner.

The UN Committee on the Elimination of Racial Discrimination last month wrote to Australia's UN ambassador to raise concerns that consultation on Adani's Indigenous Land Use Agreement (ILUA) "might not have been conducted in good faith".

These allegations "notably" included that members of the W&J native title claim group were excluded, and the committee was concerned the project "does not enjoy free, prior and informed consent of all (W&J) representatives".

Federal Resources Minister Matt Canavan said the UN should "respect the Australian legal system" instead of trying to direct Australia on matters it "clearly does not understand".

Mr Amir said it was "particularly concerned" by 2017 changes to native title laws to recognise ILUAs not signed by all native title claimants, "which appears to be in contradiction" with an earlier landmark Federal Court ruling.

"Accordingly, the committee is concerned that, if the above allegations are corroborated, the realisation of the Carmichael Coal Mine and Rail Project would infringe the rights of the Wangan and Jagalingou people, rights that are protected under the International Convention on the Elimination of All Forms of Racial Discrimination," Mr Amir said.

The committee gave Australia until April 8 to outline steps taken to ensure proper consent "in accordance with Indigenous peoples' own decision-making mechanisms".

It asked Australia to "consider suspending" the Adani project until consent was given by "all Indigenous peoples, including the Wangan and Jagalingou family council".

It invited Australia to seek expert advice from the UN experts on Indigenous rights and to "facilitate dialogue" between the W&J and Adani.

Martin Wagner, a managing attorney with US-based legal outfit Earth Justice, who has advocated for the W&J to the UN, said writing to Australia was "not a step the committee takes lightly".

"I would hope that in being called out in this way, by an international institution that is an expert in international human rights, that Australia would take that seriously," Mr Wagner said.

"It wouldn't take more at this point than putting a halt on activities to slow down and to ensure that the representatives, as selected by the Wangan and Jagalingou, are the ones who are making the decisions, who are receiving the information to allow them to either consent or not to this project."

Mr Wagner said both Australia and Adani risked their reputations by "moving forward with a project that international human rights institutions are calling out for concern about human rights violations".

Senator Canavan said the question of Adani's consent from traditional owners had been tested in Australian courts.

"The UN should respect the Australian legal system and its processes, and this particular committee should not try to direct our actions in matters which it clearly does not understand," he said.

"The Federal Court found that none of the grounds of the challenge by the mine opponents had any merit — the UN committee's letter does not even mention these facts."

Grata Fund executive director Isabelle Reinecke said the outfit had approached the W&J and agreed to pay the bond.

"People shouldn't have to choose between fighting for the rights of their community and bankruptcy," said Ms Reinecke, who is a former legal director at activist group GetUp.

"I think the significance of the United Nations raising the issue with Australia really points to the public interest question that's at the heart of this case."

Ms Reinecke said Grata's funds came from individual donations, and decisions were made by a board including former Victorian judge Marcia Neave and human rights lawyer Jennifer Robinson.

Adani registered its ILUA after an authorisation meeting which voted 294 to 1 in favour.

W&J opponents to Adani, who include Australia's first Indigenous senior counsel Tony McAvoy, boycotted the meeting, which they claim was stacked with outsiders.

They are appealing before the full Federal Court bench after Justice John Reeves earlier found "no merit" to their challenge.

Adani's lawyers asked the court to order the "impecunious" challengers to pay a $161,000 bond in case they lost, or have their appeal dismissed.

Justice Alan Robertson ordered $50,000 but found the challengers had a case.

Adani is seeking to bankrupt one of the five Wangan and Jagalingou challengers, Adrian Burragubba, over $600,000 in unpaid cost orders from previous challenges.

An Adani spokeswoman said the issues raised by the UN committee had "received transparent consideration and assessment under Australian law and before the Australian courts".

The spokeswoman said the company would "always respect Australian legislation on native title".

"We will continue to engage with the traditional owners as identified on the National Native Title and Aboriginal Cultural Heritage Registers, as we are legally bound to do under guidance of the Indigenous Land Use Agreements and the Cultural Heritage Management Plans in place since 2014," she said.

The spokeswoman claimed Mr Burragubba had been "urged on by environmental groups", including the "foreign-backed Sunrise Project that recently made a $495,000 donation to GetUp".

She said it would donate any funds from Mr Burragubba to charity.

Mr Burragubba claimed Adani was relying on a "bogus agreement".

"Their rent-a-crowd ILUA is not supported by the legitimate W&J Traditional Owners from the Carmichael Belyando native title claim area," Mr Burragubba said.

"Adani will not stop us by trying to trying to silence our voice with their awful bankruptcy tactic, which is intended to intimidate us."